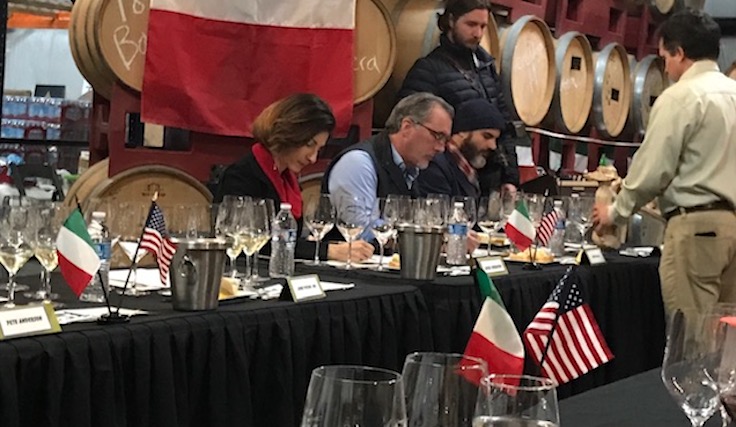 In a rare act of sobering (pun intended) courage, owners Rick and Jennifer Buffington allowed four of their favorite Italian varietals to not only be compared side-by-side in a blind tasting with their Italian counterparts, but to also be judged by a prestigious line-up of sommeliers and wine industry experts. Alongside the judges panel, their guests, including loyal wine club members, friends, family and the press were also invited to judge the wines using the UC Davis system, the gold standard in wine competitions. Confidence in their easy-drinking, award-winning wines, produced exclusively from
Italian grapes, but grown on the De Portola Wine Trail in Temecula Valley, as well as inspiration from the movie “Bottle Shock” spurred the idea for this annual wine-tasting and dining event. 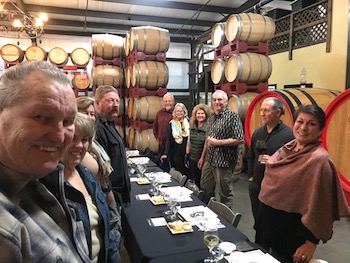 The wines compared and judged were Sagrantino, Barbera (red wines) and Falanghina and Vermentino (white wines). The six professional judges included winemakers, bloggers, sommeliers and educators who were at no point made aware of which wine they were tasting – the one produced in Italy, or the one produced at Cougar here in California. Judging blindly as well in categories such as color, bouquet, body, acidity and of course flavor and taste, attendees each provided their own scores that ultimately determined the “People’s Choice” winners of each of the varietals judged. As judging concluded, a delicious four-course dinner was served and live guitar music accompanied this casual, educational and palate-pleasing evening. 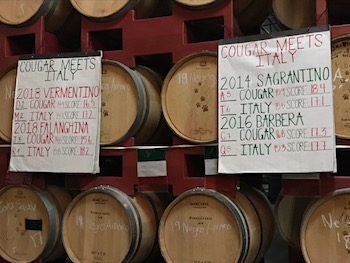 With anxious anticipation pulsing through the room, the scores were carefully compiled and it was announced the Judges Award went to Cougar Vineyard & Winery for the 2014 Sagrantino. In addition, People’s Choice awards were awarded to three of the four wines – the 2014 Sagrantino, 2018 Vermentino and the 2016 Barbera, meaning the crowd preferred Cougar’s wines over the Italian in those cases.

Thrilled with the outcome, hosts Rick and Jennifer explained the Italian Sagrantino was a fairly expensive DOCG (Denominazione di Origine Controllata e Garantita —a guarantee by the Italian government to be a wine of especially high quality) wine, which is very hard to compete against. Having the judges prefer their varietal over it meant a lot. They sincerely enjoyed the evening surrounded by peers and neighbors, whom they see often at the winery enjoying a glass on the patio,  listening to live music or grabbing a bite to eat from Sangio’s Deli at their charming, accessible, award-winning winery on the De Portola Wine Trail in Temecula Valley.