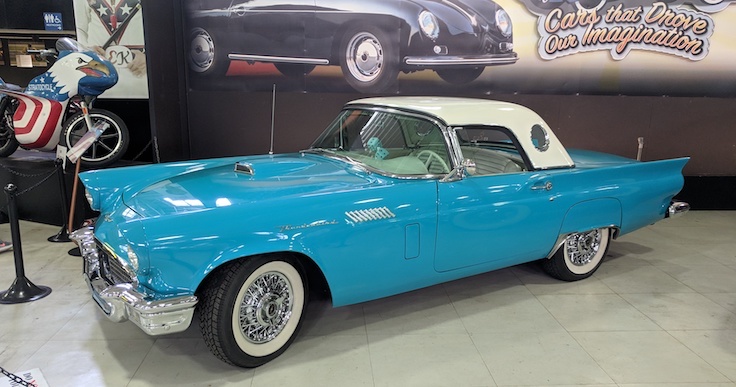 The dazzling display filling the museum’s expansive showroom features classic and famous cars and motorcycles, wowing visitors with their sleek, elegant and innovative designs. Above all, though, the show is undeniably about reverence and nostalgia, evoking entertaining and era-defining stories behind each iconic model.

All are showstoppers and hail from around the globe. Strolling about, enthusiasts and aficionados will love the exhibit including models such as:

• A gleaming 1957 Peacock Blue Ford Thunderbird. The stylish ’57 T-bird is an automobile legend, with its chiseled body, large front bumper, porthole window and pronounced tail fins. Thunderbirds were made through 1997, and a retro-style model was produced from 2002 to 2005. 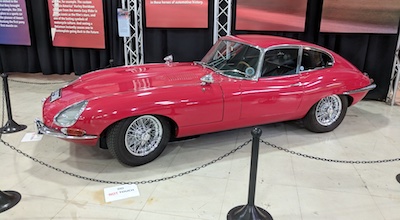 • A 1965 Jaguar E-type XKE Fixed Head Coupe. This exquisite red racer with wire wheels was known for its incredible performance, and when released was the fastest car available to the public. The car was recently in the news when Prince Harry and Meghan Markle drove to their wedding reception in a vintage Jaguar that had been converted to electric power.
• A pristine 1970 Datsun 240Z. This Japanese sports car started the Z car dynasty of the early 1970s and quickly reached icon status. Owners loved its edgy design, affordability and high performance, out-handling competitors like Triumph and Porsche. Datsun’s U.S. manager Yutaka Katayama also made sure that tall Americans could fit in the car. 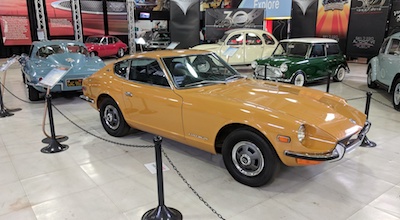 • A 1968 Mustang Fastback “Bullitt” Tribute. The first in a new class of automobile known as the “pony car,” the Ford Mustang sports coupes had short rears and long hoods. In response, other carmakers followed up with similar models. GM produced their Camaro and Firebird, Plymouth made the Barracuda and Dodge designed its Challenger. The Mustang reached iconic status after it was featured in the 1968 film “Bullitt,” starring Steve McQueen.
• A 1949 Triumph TRS Trophy 500 Custom — also known as Fonzie’s Motorcycle from “Happy Days.” The American sitcom aired from 1974 to 1984, and the motorcycle at the museum is one of three used on the show. The motorbike helped establish the TV character “The Fonz” as the “King of Cool,” and was provided for the show by stuntman and Triumph dealer Bud Ekins, who removed the front fender, painted the fuel tank silver and changed the handlebars.

The exhibit also features an elegant 1938 Delahaye known for its flowing body and pontoon fenders; a 1963 Chevy Corvette Stingray (the only year the model had a split window); a 2005 Ford GT; a 1972 Citroen; 1969 Morris Mini Cooper; 1967 Volkswagen Bug, and many more wheeled wonders.

The permanent side of the museum is also a car and motorcycle lover’s dream. Not to be missed is Louie Mattar’s Fabulous $75,000 Car, the vehicle that still holds the distance endurance record set in 1952; a 1981 DeLorean, known for it gull-wing doors and made famous as a fictional time machine in the “Back to the Future” films; and a luxurious 1931 Cadillac 452 Roadster, worth the price of admission alone. The museum’s motorcycle collection is also impressive, with models on display such as Indian, Harley, Norton, Ducati, Honda and many more.

The museum is at 2080 Pan American Plaza in Balboa Park and is free to all San Diego County residents and military with ID on fourth Tuesdays. On other visits, enjoy 2-for-1 admission here. Call (619) 231-2886 or visit sdautomuseum.org.