Head to Kansas City Barbeque to Watch the Chiefs and Other NFL Games This Season!

Come to Kansas City Barbeque to watch all the Kansas City Chiefs games this season. Doors open at the downtown San Diego restaurant at 9 a.m. for morning games. The backroom holds about 40 people, and on this particular Sunday, the room was completely filled by 10 a.m. 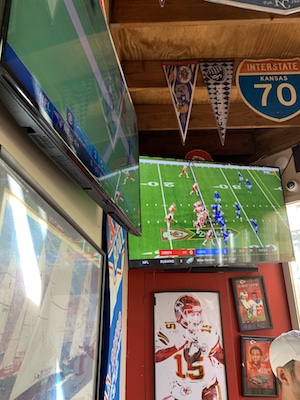 There are five televisions, four of which were showing the Kansas City game while the other was broadcasting the L.A. Chargers game. Dominated by a sea of red and white jerseys, I was greeted by a good mix of both visitors to San Diego and locals, many of whom are regulars coming in to watch the games. Most were adults, though some were families with small children. Both a drink and lunch menu were available for ordering, and included barbecue favorites such as pulled pork sandwiches, baby back ribs and beef brisket, all accompanied by several choices of delicious sides and appetizers.

The bar area also showed the games on its three televisions. With a nail-biting finish, the Chiefs prevailed with a 34-30 win over the Lions. Everyone left with a smile and satisfied appetites!