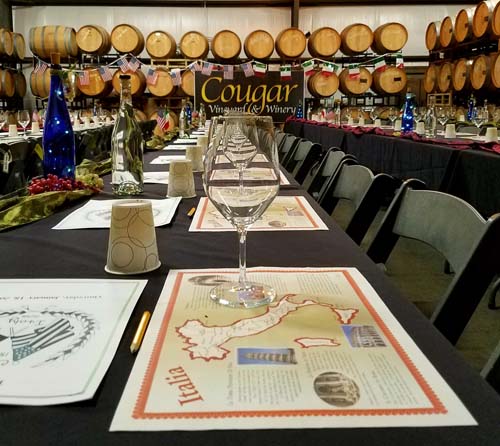 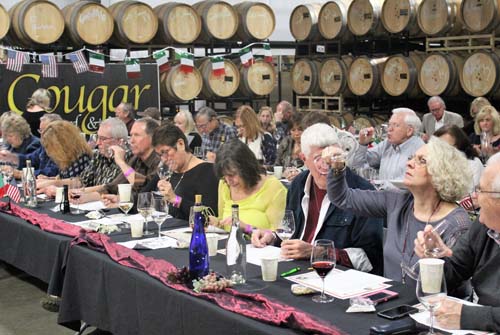 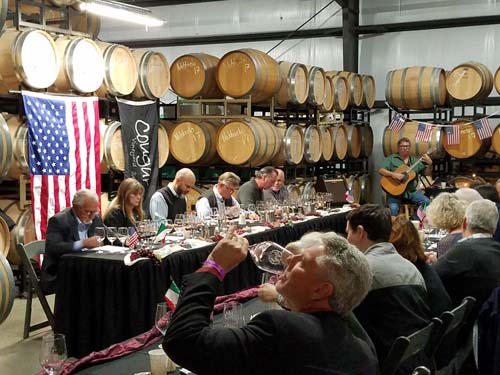 In a rare act of sobering (pun intended) courage, Rick and Jennifer Buffington allowed five of their favorite varietals to not only be compared side-by-side in a blind tasting with their Italian counterparts, but to also be judged by seasoned experts in the wine industry as well as 50 loyal wine club members, customers, friends, family and the press. The 3rd Annual “Cougar Meets Italy” event was held Thursday, January 18 at their boutique winery in Temecula, CA. Confidence in their easy-drinking, award-winning wines produced exclusively from Italian grapes but grown on the De Portola Wine Trail in Temecula Valley, as well as inspiration from the movie “Bottle Shock”, spurred the idea for this annual wine tasting and food pairing event.

The five wines compared and judged were Montpulciano, Primitivo, Negroamaro (red wines), Arneis & Fiano (white wines). The six professional judges included winemakers, bloggers, sommeliers and educators who were at no point made aware of which wine they were tasting – the one produced in Southern Italy, or the one produced at Cougar Vineyard & Winery. Their guests also had the opportunity to learn and execute the judging process using the UC Davis system, a gold standard in wine competition. Judging blindly as well in categories such as color, bouquet, body, acidity and of course flavor and taste, attendees each provided their own scores that ultimately determined the “People’s Choice” winners of each of the varietals judged.

Thrilled with the outcome, hosts Rick and Jennifer beamed with pride for all their hard work and the recognition it gleaned, but most importantly, they sincerely enjoyed an evening surrounded by peers and neighbors whom they see often at the winery enjoying a glass on the patio, listening to live music or grabbing a bite to eat from the deli at their charming, accessible winery on the De Portola Wine Trail in Temecula Valley.